What do the lifeguard flags mean? 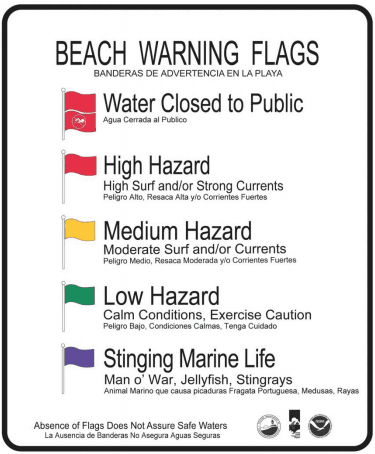 Florida’s beach warning flag program uses flags in four colors accompanied by interpretive signs along the beach to explain the meaning of each color.  The beach flags provide general warnings about overall surf conditions and do not specifcally advise the public of the presence of rip currents.

Look out for the lifeguard board that will generally indicate the presence of rip currents and general beach & water conditions.

Can I have a fire on the beach?

Where can I park at the beach?

Parking is free at any of Jupiter's parks. Including free roadside parking along the S A1A corridor.   Click here to see a map of the free parking around the Jupiter Beaches.

Where can I find out what the quality of the water is for our local beaches and rivers?

Am I allowed to bring my dog to the beach?

Jupiter is home to one of the last friendly dog beaches around.  Dogs are allowed on the beach between dune walkovers 26-57, or approximately between Ocean Cay Park and Carlin Park.  Click here to see a map of Jupiter’s dog beach. There are several rules dog owners must follow when bringing their four-legged friend to the beach.

How can I become more involved in keeping Jupiter's beaches beautiful?

Can I setup a tent and/or sleep on the beach?

Lodging (camping, living or staying for a long period of time) is not allowed on the beach or in recreational areas between the hours of 12am and 6am.

How can I reserve a beach pavilion?

All of Jupiter's beach pavilions (except for Carlin Park Civic Center) are maintained through Palm Beach County Parks and Recreation Department.  To rent or inquire about a pavilion please contact the County by visiting their website or calling (561) 966-6611

How can I rent the Jupiter Civic Center (Carlin Park)?

The Jupiter Civic Center, at the northeast end of Carlin Park, is a great place to host your next wedding, reception, birthday party, picnics, family reunions and memorial services.  To learn how to book the civic center please visit the civic center web page.

Why are some areas of the beach raked and other areas are not?

"The beaches are raked within the guarded swimming areas of the County parks where most beach goers tend to congregate. We prefer to leave as much of the coastline as possible in its natural state. The organic material washed up on our beaches provides habitat for animals living along the shore and fertilizer for dune plants.

The next time you are out on the beach, watch the shore birds and ghost crabs feeding along the weed line. Note how the weeds tend to get buried by wind-blown sand up by the dune line and see how the dune plants spread out to meet the enriched soil."

How can I help protect the sea turtles?

What types of sea turtles nest on Juno and Jupiter Beach?
Leatherbacks, loggerheads and greens. However, one may see Kemps Ridley and Hawksbill turtles swimming off our coast, but they rarely nest on our local beaches.

Are turtle nests protected on the beach?
They are protected by State and Federal law. However, only a fraction of the total number of nests on our beach are marked in any fashion. The vast majority are left to incubate naturally, without further protection.

How many eggs are there per nest?
There are approximately 100 eggs per nest, with an average 60 day incubation period.

What happens to the sea turtle eggs if they are exposed?
If the eggs are not hatched, rotation and exposure to the elements often cause the eggs to stop developing. Beach erosion commonly exposes turtle nests, which is an unfortunate but natural process.
Why do we have to turn lights off along the beach for the turtles?
Adult females avoid lighted beaches for nesting, and emerging hatchlings often become disoriented by beachfront lighting as they try to reach the ocean.

What are sea lice?

Sea lice - also known as beach lice or Sunbather's Eruption - are the larvae of thimble jellysh. They are generally found in warmer waters, such as those in the Gulf of Mexico and the Caribbean, and are most active between April and August. They are tiny specks, no smaller than a grain of pepper, and are almost invisible. “Sea Lice”

Sea lice have been reported reported in Palm Beach County and northern Broward County where the Gulf Stream pushes warm water closer to shore. They can also be found in brackish warm water such as the Loxahatchee River.

What happens if you get bit by sea lice?

Generally, sea lice bites occur when the tiny baby jellysh get caught between a swimmers' skin and their bathing suit, other clothes or even in their hair. If that happens, they will sting, though swimmers usually don't know they've been bitten right away. The itching from the sea lice usually doesn't start for four to six hours after leaving the water when people break out in an acne-like rash in the areas covered by their bathing suits or in crevices such as their armpit. The symptoms generally last two to four days but can last as long as two weeks. The rash can go away on its own or, in some cases, require more intensive medical treatment.

How to avoid sea lice bites

First, always check Lifeguard ag postings. That's a sign that there's dangerous marine life in the water and it's best to stay away. Health officials say swimmers should avoid wearing T-shirts; protection from the sun can be achieved with sunscreen. Beachgoers are advised to change out of their bathing suits as soon as possible and then take a freshwater shower. You should also wash your bathing suit with detergent and dry it under high heat to kill any of the jellysh. Don't take a freshwater shower with your bathing suit on though, as this will cause the stinging cells in the fabric to re and release more venom. Some health officials advise wearing a waterproof moisturizer, such as zinc oxide, or layers of petroleum jelly to block the stings. According to the Florida Department of Public Health, there is some evidence that using a topical sunscreen or suntan lotion could actually protect your skin from penetration by the sea lice. There are also commercial products that advertise they can prevent sea lice or jellysh stings.

And if you're stung by sea lice?

Florida Department of Health recommends treating the rash with an antihistamine or hydrocortisone cream, as well as bathing in colloidal oatmeal and applying calamine lotion to reduce the rash and itchiness. If prolonged seek advice from a medical professional.

Should I worry about jellyfish?

Jellyfish are common in Florida, but they are not everywhere all of the time. These creatures range in size from tiny to several feet in diameter, with tentacles hanging below. While most jellyfish do not sting, Florida has several species that can sting.

Contact with tentacles (even those that have broken off) can cause red, raised streaky welts that can last from 1-2 weeks and cause severe pain, tingling, itching, and even nausea and headache. Do not touch jellyfish that have washed up on the beach; even dead jellies can sting! The best advice is to look but don't touch.

What is beach tar?

The black, thick deposits that we often see on the beach and floating on the ocean is a natural seepage from the ocean bottom called "tar". Tar, or "rock oil," is a type of petroleum.  It has been around for thousands of years and has many uses. According to petroleum geologists, natural seeps can benefit the environment since oil is a natural organic substance and is food to some types of organisms.

Tar is only found in certain types of rocks, like shale, sandstone and limestone. Most of these rocks are located on the bottom of the ocean. These rocks are called porous rocks because they have many small holes in them. Porous rocks will "seep out" petroleum when there is movement in the earth or shifting of ocean floor sediments. Since petroleum is lighter than water, it rises to the top of the ocean where currents, tides and wind carry it to shore. Geologists believe tar seeps have been leaking natural tar into the environment for thousands of years.